From Gene Baldwin’s imagination and skilled hands in hatmaking, you would think he’s been a milliner for decades. But he hasn’t.

Gene spent most of his working life in Portland, Oregon as a funeral director. He also bred, raised and showed fine Arabian horses for a couple dozen years. 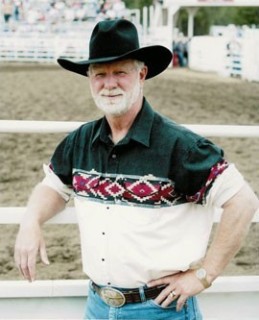 Gene’s retired… You wouldn’t know it from the quantity of hats he makes, but it’s obvious in the pleasure he derives from the process of hatmaking. The hat history he consumes. The ideas he generates. And how much he enjoys connecting with other people with any interest in hats.

Gene and his wife Debra retired to Sisters, Oregon in 1995. Gene is obviously someone who can’t just do nothing, so, in addition to his time with his horses, he started selling Serratelli cowboy hats. Then a friend asked him a pivotal question, “You just gonna sell, or you gonna try to make them?”

So, he contacted a hatmaker in Grant’s Pass and apprenticed with him. And, in 2004, decided to make hats — the old-fashioned way.

The old-fashioned way. That’s key to Baldwin. It encompasses ideas like using antique milliners’ equipment. Listening to the customer. Using the highest quality materials that work the best and last the longest. No shortcuts. Engaging with people who use cowboy gear. Engaging with other artists. Taking the time to do it right the first time.

If old-fashioned values are something you make time for in today’s busy world, and you like to wear fine hats, you and Baldwin will get along fine!