Hats aren’t the essential article of clothing they once were, but are still worn by both sexes for function and fashion. Knowing when to remove a hat is as important as wearing the right hat for the occasion.

If you were a medieval knight who failed to remove his helmet or lift his visor and identify himself the consequences could be fatal. Throughout history hats identified social standing and removing a hat was a gesture of respect.

In the “old days,” men took off their hats in Christian churches, when they entered someone’s home, when greeting a boss, and always in the presence of a lady. Ladies were entirely exempt from “hat rules,” wearing them whenever and where ever they wished.

While some of these customs are now historical footnotes, even in today’s casual culture men and women still remove their hats as a sign of respect. Rarely do women wear hats that require several minutes and several hatpins to put on, so it seems that these days, women wearing what were traditionally men’s hats perhaps should adhere to many of the hat rules that men do. 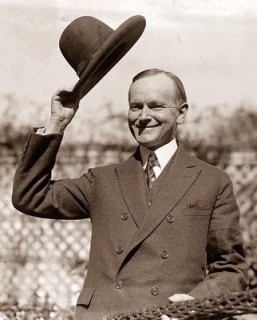 President Calvin Coolidge knew how and when to tip his hat.

Tipping of the hat is a conventional gesture of politeness. This custom has the same origin as a military salute. To tip, barely lift the hat, or respectfully touching of the brim with a nod of the head. Generally, only men tip their hats.

For men, hats are tipped, slightly lifting the hat off your forehead, when meeting a lady (remove your hat if you stop to talk), or to say to anyone, male or female, “thank you,” “excuse me,” “hello,” “goodbye,” “you’re welcome,” or “how do you do.”

Men, for the ultimate good impression, tip your hat:

Removed hats are held in hand in such a way that only the outside and never the lining is visible. Any cigarette, pipe or cigar should always be taken out of your mouth before removing or tipping your hat. If you’re a smoker, you may need to practice becoming adept at holding both your hat and your smoke in your left hand — without dropping ashes on your hat — while extending your right for the handshake.

Men and women should always remove their hats when:

And for strictest courtesy, also remove your hat when:

Leave on Your Hat

Leave your hat on when:

See Baldwin’s Hat Care section on the best way to place and remove your hat so that you do not wear a hole in the crown with the oils on your hands.

And by all means, wear your hat at a rodeo, where you will have many opportunities to tip your hat.