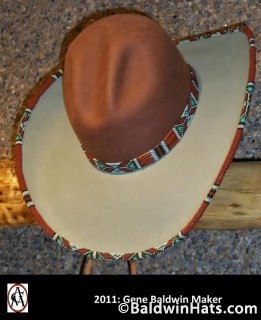 “Glendolene” is made from two blanks, the crown is “whiskey” and the brim is “willow” colored with custom-beaded hatband and brim, with porcupine quills added to the band.

Gene Baldwin’s “Glendolene” took top honors at the Art of the Cowboy Maker’s show in Loveland, Colorado June 8-11, 2011, earning the judges’ votes for Champion Hattter and the People’s Choice award for Best Hat as well!

Glendolene was the name of Tom Horn’s girlfriend, who as it happened, was the sweetheart of a federal marshal prior to her partnering with Tom. Perhaps this was a factor in his death sentence for the murder of a thirteen-year old rancher’s son. Tom was hung on his own birthday.

More about the Art of the Cowboy Makers and their events on their facebook page and their website.