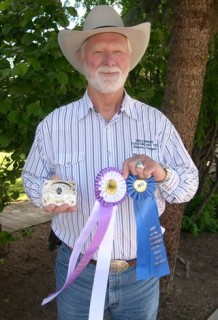 Baldwin and his winnings. photo by Jim Cornelius

Sisters’ own Gene Baldwin is the king of the cowboy hatmakers. He won his crown at the Art of the Cowboy Makers contest in Loveland, Colorado, earlier this month.

The Art of the Cowboy Makers Contest is held annually in conjunction with the Loveland Old West Round-Up Western Collectable Show. Each year contemporary makers bring their best work and compete for silver trophy buckles, cash prizes and ribbons.

The winners in each category are determined by two separate votes. The makers are judged first by their peers; quality of craftsmanship is the hallmark of this award. The second vote is cast by the public, those attending the Western collectable show, and it is presented as the “People’s Choice” award. The People’s Choice winners know that they have captured the viewers with their quality of craftsmanship as well as their artistic flair.

Baldwin swept both categories, earning first-place ribbons and buckles from both the judges and the folks. He was also named “Master Hatter” of Art of the Cowboy Makers. 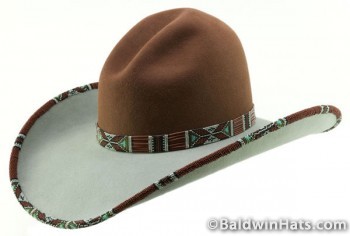 Glendolene,” the hat that Baldwin made for the competition. photo by Lynn Woodward

“It was a lot of fun,” said Baldwin, who operates Baldwin’s Custom Hats from his ranch east of town. “I had a great time and met a lot of nice people.”

The contest draws an international roster of cowboy artisans, from saddlemakers to bootmakers, silversmiths to hatters.

Baldwin said he was especially impressed by a hand-stitched saddle from the Czech Republic.

Baldwin has been in business since 2004. The market for his hats stretches across the country — and many folks in the Sisters Country now wear Baldwin Hats.